Stephen Bayliss is a Preston born Singer/ Entertainer who performs internationally at a variety of Private, Corporate and Celebrity events. Singing songs from every era covering artists from Tony Bennett to Lionel Richie. Stephen is also known as a Songwriter and has a strong following when he performs his original material with a live band in theatres around the Country. Though Stephen has performed at many charity events over the years and still does, he wanted to concentrate and make a commitment to a local charity. After a visit to The SPACE Centre Stephen was moved enough to want to help make a difference and was honoured when he was asked to be a patron. 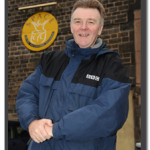 Gilly joined BBC Radio Lancashire in July 2005. He quickly became one of the most popular presenters on the station and is always willing to try his hand at various jobs. John is married to Margaret and they live on the outskirts of Preston with their 24 year old son Ian. John likes listening to music ‘off air’ and says the blend of music played on BBC Radio Lancashire is just right for his own ear as well as the listeners. In his spare time John likes to walk his dog Christie, a cheeky cross collie. He also lists photography as another interest as well as ten pin bowling, but bravely admits he needs the lane bumpers in place to help him get big scores! He got involved in SPACE when he was at Red Rose Radio when he took part in charity fundraising events in the Preston area then when he came to work at Radio Lancashire and interviewed SPACE Staff about our project to build a new centre, he thought he would like to be involved again. Since then he has attended our annual Fun Day and compered this event for us and supports us by announcing our events on Radio Lancashire, we are very grateful for his enthusiastic support.